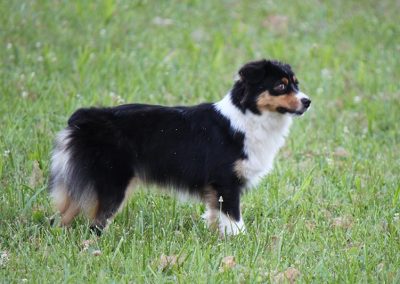 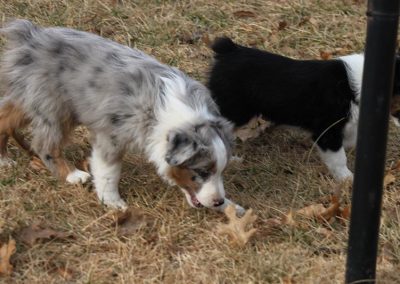 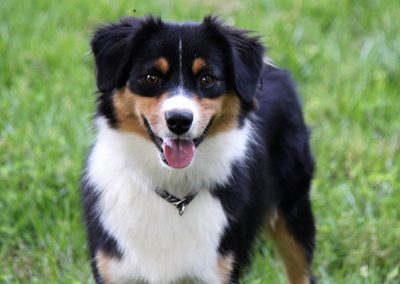 History of the Miniature American Shepherd aka Mini Aussie

The History of the North American Miniature Australian Shepherd actually began with the History of the Australian Shepherd. Though most facts are shrouded in time, the most commonly held belief on the origins of the Aussie began in the late 1800’s when western ranchers were importing sheep from Australia. During this period the most popular sheep were being imported into Australia from the Basque regions of Spain. When the herds were shipped, their shepherds were sent with them to manage and care for the flocks on the journey. As the Australian’s reputation for quality sheep grew, the demand for their sheep grew also and American ranchers began importing them. The livestock were shipped to the America’s, again accompanied by the Basque shepherds and their herding dogs. Ranchers of the American west were reportedly very impressed with the working ability of these “little blue dogs” and began interbreeding them with their own shepherd dogs. The result being the Australian Shepherd.

The Miniature Australian Shepherd was developed directly from the Australian Shepherd. Throughout the history of the Aussie, small (under 18″) dogs can be seen in historical photographs. Many believe that the original Aussie was selectively bred larger as sheep ranching decreased and cattle ranching increased. Cattle ranchers preferred a larger dog to work the larger stock. Some Aussie owners have continued to prefer the smaller sized Aussie while other prefer the larger of the breed.

In 1968 a horse woman in Norco, California, began a breeding program specifically to produce very small Australian Shepherds. Her name was Doris Cordova, and the most well known dog from her kennel is Cordova’s Spike. Spike was placed with Bill and Sally Kennedy, also of Norco, California, to continue to develop a line of miniature Aussies under the B/S kennel name. Another horseman, Chas Lasater of Valhalla Kennels soon joined the ranks of mini breeders.

Cordova, Lasater and the Kennedy’s together attempted to form the first parent club for the miniatures. Although the club never quite got off the ground, their stated purpose for developing the miniatures was to produce an Australian Shepherd under 17″ who had the heart, intelligence and drive to work stock, and yet be small enough to travel easily to stock shows and be a “house” dog.

Cordova’s dogs were registered through the National Stock Dog Registry (NSDR) and eventually NSDR came to be the first registry to recognize and register the mini as a size variety of the Australian Shepherd.

Originally recognized in (1989-1990) they were shown with the RBKC of Southern California (Rare Breed Kennel Club) as Miniature Australian Shepherds. The miniature gained in popularity and the owners and breeders missed the cohesive nature of a parent club dedicated to the miniature, so in 1990, the Miniature Australian Shepherd Club of the USA (MASCUSA) was formed. Kathy Croswhite (Munson), Jeanine Perron, Florence Toombs, Susan Sinclair and Richard VanBurkleo served as the first Board of Directors, and one of MASCUSA’s most notable early achievements during that time, was to gain recognition of the miniature by the American Rare Breeds Assc. (ARBA) to provide a Nationally recognized conformation show venue.

Today, breeders of the Miniature Australian Shepherd continue to strive to produce Aussies of a smaller stature. Preservation of the herding instinct as well as the intelligence and athleticism of the mini is a priority in breeding programs, as well as continuing the reputation for health and easy companionship that the mini enjoys.

Have Questions? We can Help